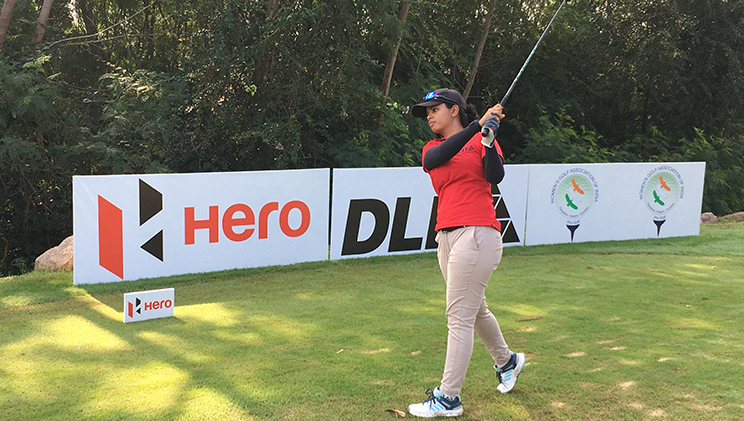 Arnhem, The Netherlands, July 17:Vani Kapoor dropped a late bogey on a Par-5 even as three-time Major champion, Anna Nordqvist, birdied her last three holes to take a one-shot lead after the third round of the Big Green Egg Open.

As Nordqvist (67) moved to 7-under, Kapoor was 6-under and tied second with Austria’s Sarah Schober (73) after 54 holes at the Rosendaelsche Golf Club.

As Kapoor moved from third to second, Diksha Dagar, the other Indian in Top-5, shot 73 that included a rough patch with three bogeys in four holes from eighth to 11th. She slipped to Tied-fifth but is only three of the lead and two behind Kapoor.

Vani Kapoor, who plays with Anna Nordqvist and Sarah Schober in the final group, carded a third round score of 71 (-1). Birdies on the fourth and tenth gave the 28-year-old Indian the lead at one point in the day, before a dropped shot on the 15th saw her fall back into a tie for second.

A missed birdie putt on 18 summed up Kapoor’s day on the greens on Saturday, but she is excited to play in the final group in an LET event for the first time on Sunday.

“I left quite a few putts out there, I gave myself a lot of chances. I putted well but they didn’t go in the hole - I had two lip-outs and one stopped on the edge - but I’m hoping for a better day tomorrow,” she said.

“My accuracy is helping on this course, this course is tight and you need to hit fairways and greens here, and as long as I keep doing that the scores will keep coming.

“I’m really excited to be in the final group, I’m glad that things are falling together and I’m finally here, and I hope tomorrow goes well as well. To play with Anna will be amazing and I’m really looking forward to it.”

It was a return to form for Nordqvist at the start of the weekend, who overturned a six-shot deficit from the start of the day to take the ascendency, and she was delighted with her day’s efforts.

Sarah Schober also sits on -6 with 18 holes left to play, with the Austrian picking up four shots in her final four holes to card a third round score of 73 (+1).

Sitting one shot back on -5 is Nuria Iturrioz, with the Spaniard rolling in birdies on 12 and 18 while dropping a shot on 15 to register a third round score of 71 (-1).