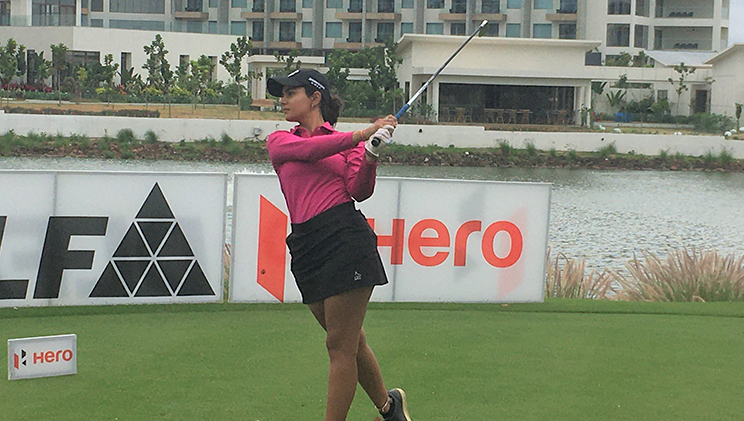 Bengaluru, July 22:Seher Atwal kept her nerves in control for a winning birdie on the 18th to win her first title of the season in the 10th leg of the Hero Women’s Pro Golf Tour 2022. Seher was runner-up in her last two starts.

A dramatic battle unfolded on the final day at the Prestige Golfshire with no less than four contenders for the title. Seher (72) lost her overnight lead early on the front nine and Sneha Singh led at the turn with a 2-under 34 front nine. Then Nayanika Sanga (70) made a charge to set the clubhouse target. For Neha Tripathi, the putts would not fall. She ended with a par on 18th and an even par 72, though a birdie on the last hole would have forced a play-off with Seher, whose last 10 holes with three birdies and no bogeys clinched the issue.

Nayanika Sanga, a Gurgaon golfer who turned 18 last month, turned in a fine performance finishing with 2-under 70. She ended one short of Seher and was in a tie for second with Neha Tripathi (72).

Seher started the final day one shot ahead of Neha, but dropped three shots on the first, third and sixth while Neha had just one bogey on fifth. At that point Neha was one shot ahead of Seher. Neha birdied the eighth.

The battle became intense as Seher birdied the ninth and Neha bogeyed it for a two-shot swing that brought them level, but both were two shots behind the third player in the final group, Sneha Singh. Sneha played a superb front nine of 2-under 34 with four birdies and two bogeys.

Seher birdied the 11th to go ahead, Neha pulled level with a birdie on 12th and the duo was level till they came to the 18th. Seher pulled off a birdie, while Neha missed out.

Sneha had a roller-coaster of a final day. She started at 2-under and was going great guns as she had four birdies against two bogeys to get to 4-under for the tournament after the first nine. She also moved into the lead ahead of her playing partners, Seher and Neha.

Sneha faltered thereafter with bogeys on 11th and 12th and a birdie on 16th brought her back to 3-under and alongside Seher and Neha.

Sneha’s chance ended with a bogey on 17th, and she parred 18th for a card of 72 with five birdies and five bogeys. She finished 2-under 214 in fourth place.

Neha, who held a share of the first-round lead, paid the price of two bogeys on the front nine, though she did have a birdie too. On the back nine Neha had just one birdie and ended with a par on 18th where she needed a birdie to get into a play-off with Seher.

Meanwhile, Nayanika who was playing one group ahead of the lead group, started the day three shots behind Seher. She birdied the 10th and 13th and finished 15 minutes ahead of the leaders with another birdie on 18th to set the clubhouse target at 3-under 213.

When Seher and Neha came to the 18th, they were at 3-under and tied with Nayanika, who had finished. The prospect of a three-way play-off loomed large. Seher ended that with a birdie, while Neha managed only par. That gave Seher a well-deserved win, while Neha and Nayanika were tied for second. Sneha had been pushed to fourth.

Pranavi Urs (70) made another attempt to get into the frame, but the first day 76 was too big to make up and she finished at 1-under 215 for fifth place.

Gaurika Bishnoi (70) and Hitaashee Bakshi (70) were sixth and seventh while amateur Vidhatri Urs (71) was eighth. Gauri Karhade (72) was ninth and amateur Keerthana R Nair (71) was 10th.

Interestingly, the last day produced some excellent scores with as many as six of the top-10 being under par rounds. Four others in the Top-10 and Anisha Agarwalla in T-17 were even par for the last round.

Pranavi Urs (Rs.9,90,500) stayed in front on the Hero Order of Merit, while this week’s winner Seher Atwal (Rs.6,91,500) made a big move from sixth to second. Hitaashee Bakshi (Rs.6,80,000) caught up with Jahanvi, who did not play this week, to be tied third with her sister on the Merit list with identical earnings.