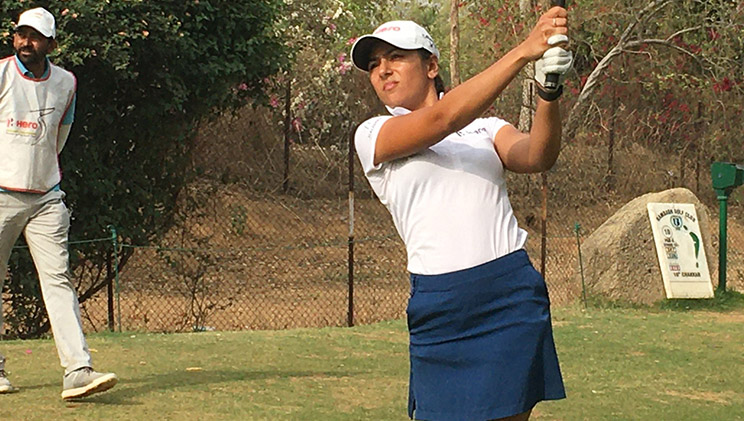 Tvesa finds her touch on the greens, takes 3-shot lead in 6th leg of Hero WPGT

Jaipur, March 18:Tvesa Malik finally found the form she was seeking on the greens and produced a flawless 4-under 66 which carried her to the top of the leaderboard at the end of the second round of the sixth leg of the Hero Women’s Pro Golf Tour at the Rambagh Golf Club.

With rounds of 71-66 she is now 3-under 137 and three shots clear of overnight leader Jahanvi Bakshi (71), whose round was a mixed bag of three bogeys and two birdies while playing alongside Tvesa and sister, Hitaashee (75), who had an off day with five bogeys and no birdies. Jahanvi (69-71) is even par 140.

Tvesa, who has not won since the 13th leg in 2019, a season in which she won three times, was happy as her game bounced back. “I felt confident with my putting after quite a while and I made the putts I needed. I also hit well and the most satisfying thing was I kept bogeys off the card. Let’s see how things shape up in the final round,” said Tvesa.

Climbing into the third spot was Ridhima Dilawari (71), who after being 2-under through 10 holes, dropped shots on second, third and eighth holes as she started from the tenth hole at the Rambagh Golf Club.

Amateur Avani Prashanth maintained her steady play once again and was the leading amateur after a round of even par 70 that had two birdies and two bogeys. She was sole fourth.

Amandeep Drall, another 10th tee starter, was even par after first nine, but then gave away four bogeys and a double bogey in an eight-hole stretch before ending the day with a consolation birdie. Her round of 75 saw her slip to Tied-fifth alongside Hitaashee Bakshi.

Amateur Kriti Chowhan, a local girl, shot a fine 71 and was seventh at 147, while Seher Atwal, winner of the fourth leg, had a 73, the same as Vani Kapoor, and both were Tied-8th.

Tee times for the first round of the sixth leg of the Hero Women’s Pro Golf Tour at Rambagh Golf Club, Jaipur: