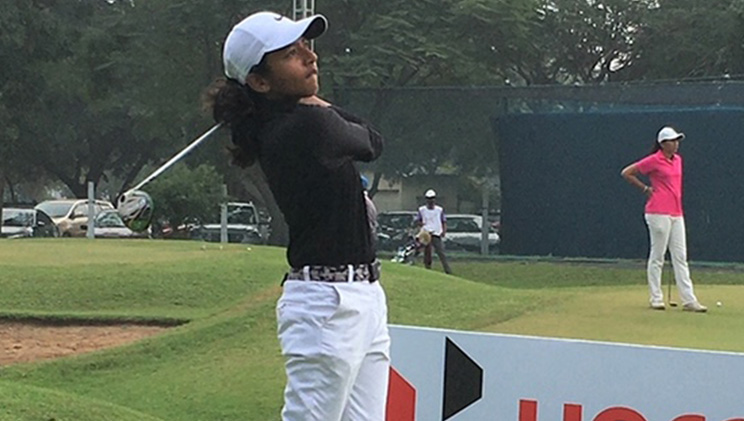 Mumbai, Feb 12:Teenaged Avani Prashanth rode on the wings of an eagle followed by some steady golf to join the elite list of amateurs who have won a pro title on the Hero Women’s Pro Golf Tour. A brilliant final round of 3-under 67 in the third leg of the Hero WPGT saw her overturn a three-shot deficit into a 2-shot win at the Bombay Presidency Golf Club on Friday.

Avani, just 14 years of age, started and ended the week with cards of 67 and in between shot even par 70 on the second day. Her three-day total of six-under 204 saw her top the charts ahead of the experienced Amandeep Drall (69) who aggregated 4-under 206.

Vani Kapoor (68) finished third at 208, while Seher Atwal, searching for her maiden win as a pro, struggled on the front nine with a 40 and carded 75 to drop to fourth place at 1-under 209. The top four players had under par totals.

Sisters Jahanvi Bakshi (70) and Hitaashee Bakshi (71) were fifth and sixth, while Ridhima Dilawari (69), who herself won as an amateur back in 2018, ended seventh despite an eagle finish. Rhea Purvi Saravanan (74), Gauri Karhade (72) and Khushi Khanijau (75) occupied the eighth to 10th places.

Avani, who first wielded a golf club thanks to her father MS Prashanth, has been playing competitive golf since the age of six and is well travelled, having also played at the UK Kids International events, including the one in Scotland. A product of the Eagleton, she is now trained by Laurence Brotheridge, who coaches from the Leeds, UK. Avani was also picked by the Virat Kohli Foundation in 2019 and since then her career has been on the rise including a bunch of wins on the amateur circuit.

In the final round, Avani started in the lead group but was three shots behind overnight leader Seher. A superb eagle on the first was followed by birdies on fifth and eighth and despite a bogey on ninth she turned in 3-under 32 and had taken over the lead.

Seher meanwhile had a rough day with three bogeys and two doubles against two birdies for a front nine total of 40. Amandeep Drall, who was even par on the front nine and Vani Kapoor, who shot 2-under 33 on the first half, were also trailing Avani, who then maintained a steady run with one bogey and one birdie on the back nine.

Amandeep, Vani and Seher had up-and-down runs and were unable to catch Avani, who coasted to a well-deserved win.