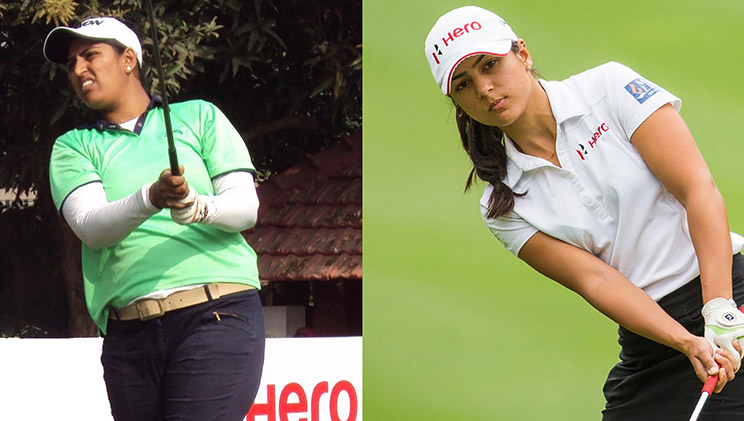 Saaniya leads by one shot over Tvesa, Bakshi sisters in 5th leg of Hero WPGT

Gurugram, March 10:Saaniya Sharma finally found the form she has been searching for this year as she holed five birdies against three bogeys for the day’s best of 2-under 70 on the first day of the fifth leg of the Hero Women’s Pro Golf Tour at the DLF Golf & Country Club.

Saaniya’s best finish this season has been T-12 but in the first round at Gurugram she shot her best round of the year. It gave her a one-shot lead over the trio of experienced Tvesa Malik and the Bakshi sisters, Hitaashee and Jahanvi. They carded 1-under 71 each at the challenging Gary Player layout.

Tvesa Malik, playing with Saaniya in the first group this morning, had two birdies against one sole bogey on the par-5 15th. She said, “It was disappointing that I could not take my chances,” said Tvesa, who plans to keep playing on the domestic Tour to keep honing her game before she goes to Europe in summer.

The top amateur was the talented Avani Prashanth, who has already tasted success. She may well have been a joint leader but for the double bogey on the Par-5 18th. She was sole fifth at 72, while Vani Kapoor, playing at her home course, carded 74 and was sixth.

Saaniya, a qualified referee and a coach to boot, has been playing patchy golf this season and was therefore happy to get a card under par. “I have worked hard last few weeks, so it is good to see the scores coming in,” she said. The key will now be to maintain consistency over the next two rounds.

Jahanvi Bakshi was cruising at 5-under through 12 holes before she hit the roadblock with a triple bogey on Par-4 13th hole, which gave grief to a lot of the players. She also dropped a bogey on Par-5 15th, but parred the others to limit the damage and shot 71.

Hitaashee Bakshi, who had her maiden win last year, was 2-under through the front nine with three birdies and a bogey. She then parred eight holes in succession. A par would have given her a share of the lead, but she dropped a shot on 18th to fall back to 71.

Three players Gauri Karhade, Shweta Mansingh and Lakhmehar Pardesi were Tied-7th with 76 and three others Neha Tripathi, Oviya Reddi and amateur Riya Yadav shot 77 each to be Tied-10th.

Ridhima Dilawari hurt her left arm and pulled out after shooting 81, while Diksha Dagar, bothered by her back, struggled to 87. Amandeep Drall also did not have a great day as she shot 79, which included a quintuple bogey nine on Par-4 13th hole.

Tee times for the second round of the fifth leg of the Hero WPGT at DLF Golf and Country Club, Gurugram: