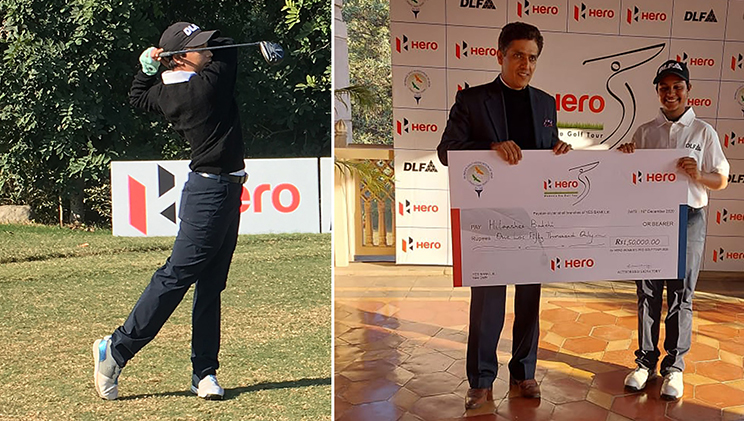 Gurugram, Dec 18:Hitaashee Bakshi, playing only her second event as a professional, emerged as the latest winner as the 2020 chapter of the Hero Women’s Pro Golf Tour came to an end at the Classic Golf and Country Club. Hitaashee (70) totalled 2-under 214 for the tournament beating the overnight leader Amandeep Drall (73) by three shots.

Amandeep capped a fine season with a second place and finished on top of the Hero Order of Merit. She had earlier won the eighth leg.

The 16-year-old, Hitaashee, who made her first start as a pro in the eighth leg and finished eighth, rose to the top with a brilliant two-under 70 that gave her the only under par total of the week at 2-under 214.

The lowest card of the week came from Seher Atwal (69), who finished Tied-third alongside Ridhima Dilawari (73). Astha Madan (72) at 3-over 219 was tied for fifth with the top amateur Avani Prashanth (74). Hitaashee parred all nine holes of the front nine and got her first birdie on the 10th even though she had moved into a comfortable lead by then.

Amandeep had an error-filled front nine with a double bogey at the first, a triple bogey on the Par-4 seventh and a bogey on Par-5 ninth. She had just one birdie in reply and shot 5-over 41 for the front nine, at which stage Hitaashee had raced way ahead to a four-shot lead.

Hitaashee took over the lead on the very first hole despite a par as Amandeep double bogeyed and the overnight one-shot lead had become a one-shot deficit for the Panchkula golfer.

On the back nine, Hitaashee birdied 10th, 14th and closed with a birdie o 18th from almost nine feet soon after her only blemish of the day on 17th. Amandeep made a fair bid on the back nine with three birdies but her mistakes on the front nine proved too costly.

“I knew I had a chance and I could win after the start,” said Hitaashee, who hugged her elder sister, Jahnavi, waiting for her at the 18th green. “I felt confident and I am glad I could manage that,” added a smiling Hitaashee. Hitaashee, who was runner-up to Sneha Singh at the All India Amateurs in Mumbai in December, became the second rookie to find success in her maiden season in 2020. In March this year, Pranavi Urs won on her first start as a pro, a week after emerging a winner as an amateur.

A product of the Army Golf Club, Hitaashee and her sister, Jahanvi, now train at the DLF Golf and Country Club as part of their excellence programme and are coached by former India international Anitya Chand. “We are moving from Dhaula Kuan to Gurgaon for their golf,” said Sunita Bakshi, her mother, while her father, Navneet, an Army man, confessed this was the first time he was seeing his daughters play in a pro event and was thrilled to see her mark it with a win. “I am off to North East for my next posting and it is so wonderful to see both play well.”

The WGAI Tour will now resume with the first leg of 2021 from January 12 to 15, 2021 and the event will be held at Prestige Golfshire, Bengaluru.