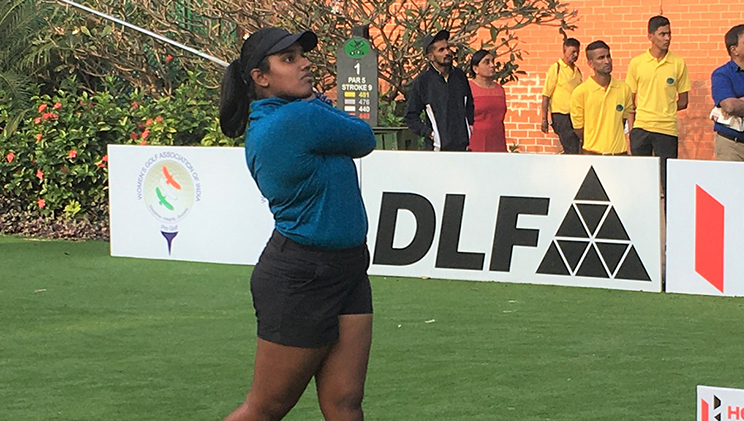 Chennai, Feb 12:Local golfer Oviya Reddi made good use of her knowledge as she shot her best round as a pro on the first day of the third leg of the Hero Women’s Pro Golf Tour at the TNGF Cosmo Golf Course on Wednesday. She shot one-over 73 to take sole lead at the end of the first round.

The 19-year-old Oviya, who turned professional in the middle of the 2019 season, has shown signs of improvement this season. Playing at a layout which saw some minor changes a few years ago, Oviya had four birdies against three bogeys and one double. She is among the few players in this field who have played at this course, where Women’s Golf Association of India is having its first ever event.

Oviya was actually four-under through the first seven holes at the TNGF Cosmo layout, where she plays often. She birdied the first, second, fifth and seventh. Her first blemish was the double bogey on the Par-3 eighth, but she steadied herself with a series of pars. Then she ran into three bogeys on 13th, 14th and 15th before closing with three more pars for 73.

Trained by Gaurav Diwan and also S Jayanan, whenever she needs advise, Oviya has shown good progress recently and was seventh in the second leg at BPGC in January.

Amandeep Drall, whose last win was at the10th leg last season, shot 74 with no birdies and just two bogeys.

Ananya Datar, who was in the first group of the day, seemed to be heading for a good score as she was one-over after the 15th with two birdies against three bogeys. She then dropped shots on 16th and 18th to fall to 75 and was third.

Amateur Sneha Singh, who won a Hero WPGT event last year, seemed fine at one-over after 10 with one double on eighth and a birdie on 10th. After that she dropped four shots in a row from 12th but a birdie on the Par-3 17th gave her some consolation as she ended the day at 76.

Six players including Ishvari Prasanna, who had the day’s only eagle two with a hole out on the Par-4 second, were Tied-fifth with 77 each.

Some of the more fancied names had a tough day with the winner of the second leg, Pranavi Urs, struggling to eight-over 80 in her first round after turning pro. She had six pars and then a birdie on seventh. However, after that she dropped one triple, one double bogey and four more bogeys.

Vani Kapoor carded 79 with one birdie against eight bogeys, six of which came on the back nine.

Tee times for Round 2 at the TNGF Cosmo Golf Course, Chennai for third leg of Hero Women’s Pro Golf Tour :