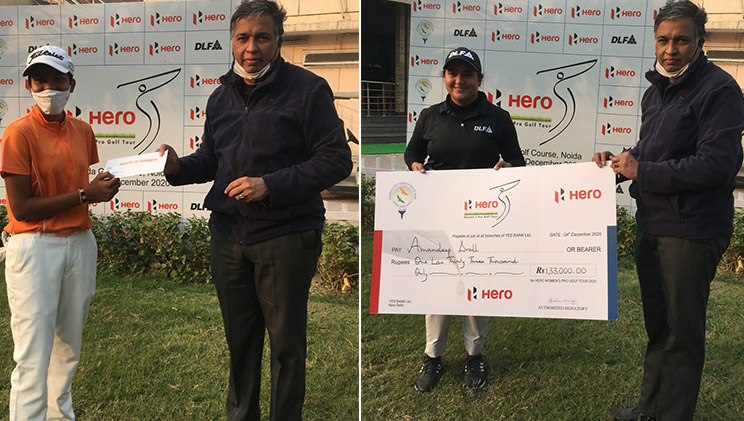 NOIDA, Uttar Pradesh, Dec 4:Amateurs took the spotlight as Sneha Singh completed a wire-to-wire win in the seventh leg, as the Hero Women’s Pro Golf Tour staged its first event after nine months at the Noida Golf Course. Hyderabad amateur teenager Sneha, who won a title on the Hero WPGT in 2019, overcame a difficult start and then a potentially crippling triple bogey to hold her nerve over the closing stretch to win by a comfortable margin of four shots. Her closing 74 gave her a total of 1-over 217.

Hunar Mittal, another talented amateur, carded the final day’s best score with an even par 72 that showcased a bogey free back nine of 2-under 34, as she aggregated 5-over 221.

With amateurs holding sway, Amandeep Drall was the top professional as she shot 2-over 74 and finished in a tie for second with Hunar Mittal. Amandeep however took the top cheque.

Two of the top pros expected to make a bid for the title, Ridhima Dilawari (80) in T-12th and Diksha Dagar (81) in 15th place, just did not get going this week. But both will be back next week for the eighth leg of the Tour.

Sneha opened the day with a one-shot lead but bogeyed the Par-5 first. She quickly made amends with a birdie on second, but a triple bogey on Par-4 sixth endangered her title ambitions. She bounced back again with a birdie on Par-4 seventh and added another on Par-3 10th. Despite bogeys on 11th and then 14th, she held on with a birdie on 15th. She was also aided by the fact that Amandeep Drall had a rough front nine with four bogeys against just one birdie.

Vani Kapoor also had three bogeys and no birdies in the front nine. She managed only one birdie and then gave it away on 18th, allowing Sneha to stay in the race and eventually win.

Vani Kapoor, who began the week with an encouraging 72, had her second successive 75 and at 6-over 222 she was Tied-fourth with Siddhi Kapoor who gave away six bogeys between fifth and 12th holes.

Interestingly, two other amateurs, Avani Prashanth (79) and Nayanika Sanga (76) were 11th and Tied-12th, as all five amateurs finished inside the Top-12, indicating a lot of depth in talent in amateur ranks.

Sneha, 15, daughter of Sanjay Singh, a pro who is also her coach, has now won a pro title in two straight seasons. She won the 11th leg of the 2019 season at the Hyderabad Golf Club, her home course, and now her success at Noida Golf Course shows her increasing maturity as she held the lead through the three days and did not succumb to pressure.