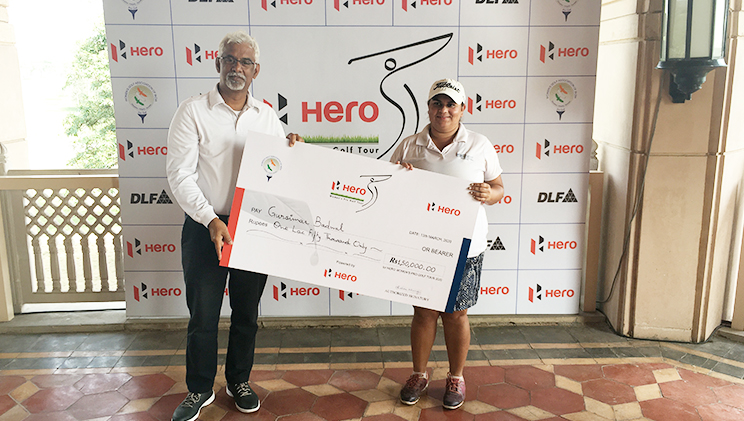 Gurugram, March 13: Gursimar Badwal ended a 14-month title drought with a superb three-under 69 that saw her complete a fine rally and won the sixth leg of the Hero Women’s Pro Golf Tour at the Classic Golf & Country Club, Gurugram.

Gursimar, whose last win came in the second leg of the 2019 season in Pune, had opened the tournament with a disappointing seven-over 79 and was T-13 after the first day. She recovered from there with 67-69 in the second and final round to total one-under 215 and emerge a winner by two shots over Saaniya Sharma (67) and Vani Kapoor (72). Vani may not have been able to win her second title but she did have the consolation of taking over the lead in the Hero Order of Merit after the erstwhile leader, Amandeep Drall had to withdraw from the final round.

Saaniya Sharma made a big charge, including a birdie-birdie finish for a five-under 67. She jumped from Tied-10th to Tied-second place on the final day. Sharing the runner-up spot with Saaniya was Vani Kapoor (73-72-72), who played very consistently on all three days.

Neha Tripathi shot 71, one of the three sub-par scores of the day. She totalled two-over 218 and was fourth.

Overnight co-leader, Asmitha Sathish (74) suffered two double bogeys, one on the Par-4 seventh and another on par-3 17th. Those errors cost her a chance to make a run for the title. She also had four birdies and two bogeys for a 74 that left her in fifth place.

Gursimar, who started the day only one shot behind the leaders Vani Kapoor and Asmitha Sathish, got off to a great start with birdies on the first two holes and another on fourth. By then Vani had one birdie and one bogey and Asmitha had one bogey, leaving Gursimar as the sole leader, who then was one-under and the only player under par.

Gursimar played steadily and had pars over the next four holes before adding a fourth birdie on 10th. Her sole bogey of the day was on 11th after which she comfortably coasted through with pars on her last seven holes.

Saaniya Sharma, who like Gursimar had shot 79 on the first day, carded 71 in the second round. In the final round, Saaniya played flawless golf and was the only player to be bogey free. She birdied third and ninth and added a third on 12th. She also birdied 17thand 18thand finished at one-over 217, which became the clubhouse target for the final group.

Vani Kapoor paid the price for three early bogeys in first six holes, though she also had a birdie. From the seventh to 18th she managed to avoid bogeys and also birdied 14th and 16th and reached one-over. However, Gursimar stayed ahead and cruised to a deserving win.

Pranavi Urs (74) was sixth, while Siddhi Kapoor (74) was seventh and Gaurika Bishnoi (73) was eighth.

Amateur Hunar Mittal, who began with a superb 72 on the first day, and Oviya Reddi (79) rounded off the Top ten.