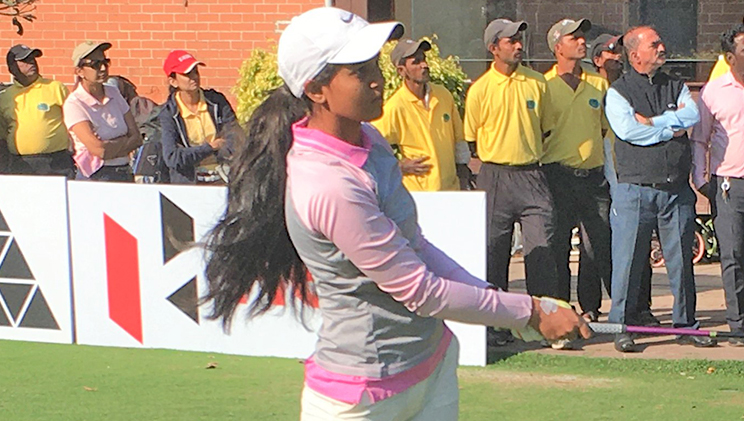 Mumbai, Jan 17:Amateur Pranavi Urs made up for her last week’s final hole disaster by winning the second leg of the Hero Women’s Pro Golf Tour at the Bombay Presidency Golf Club on Friday. Pranavi carded one-over 71 for a total of five-over 215, while Ananya Datar shot 73 and lost by two shots.

Pranavi celebrated her win by turning professional. However, she got only a gift voucher this time, while Ananya, still winless on the Hero WPGT, got the winning cheque worth Rs.1,50,000 and moved to the top of the Hero Order of Merit.

Pranavi had a great start with three birdies in the first five holes, before she dropped a shot on sixth. On the back nine, she had some nervous moments as she bogeyed three times. Ananya, one of the three co-leaders overnight, was unable to capitalise on that.

On the back nine, as Pranavi made mistakes, Ananya was unable to pull in birdies and played even par for the stretch with one birdie and one bogey.

Pranavi dropped a shot on Par-4 12th and another on par-4 14th but Ananya gave away a shot she had gained with a birdie on 13th by bogeying the 14th. At three behind, Ananya still had five holes to put pressure.

Pranavi dropped one more shot on Par-5 16th and the gap was down to two. Over the last four holes, Ananya tried hard but could not hole any birdies as Pranavi won her second title on the Hero WPGT, while still being an amateur.

Pranavi’s earlier win on the Hero WPG Tour came in the ninth leg of the 2018 season.

Tvesa began with a bogey but a birdie on fifth meant she was only two behind Pranavi till arriving at the eighth tee. She then dropped six bogeys against just one birdie in the last 11 holes and never had a chance to bid for the title.

However, back-to-back bogeys on eighth and ninth put her four behind Pranavi. At that stage Ananya, three-over for the front nine, was five shots back.

Afshan Fatima, who started the final day one shot behind the three leaders, saw her chances take a hit with back-to-back bogeys on eighth and ninth. Two more bogeys on 12th and 17th set her back further and the birdie on the 18th was too little too late. She carded 73 and at 218 she was third.

Tvesa (75) uncharacteristically dropped six bogeys on eighth, ninth, 11th, 12th, 14th and 17th and the birdie on 18th was a very small consolation.

Anousha Tripathi (76) and the 2019 Order of Merit winner, Gaurika Bishnoi (78), who after a birdie on first, had four bogeys and two double bogeys for 78, were Tied-ninth.

Ananya Datar leads the Order of Merit after the first two events, while Afshan Fatima is second. Ridhima Dilawari, who won the first event and skipped the second, is third.