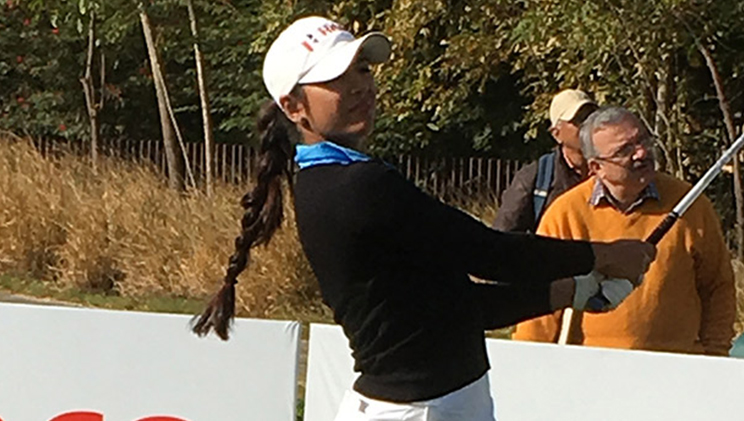 Gurugram, August 28:Tvesa Malik got off to a flying start in the 13th leg of the Hero Women’s Pro Golf Tour with a four-under 68 that gave her a four-shot lead over Gaurika Bishnoi and Gurjot Badwal, who carded even par 72 each.

Playing at Gary Player’s Black Knight course at the DLF Golf and Country Club, Tvesa started the day with 10 pars in a row, before coming up with three successive birdies. She dropped a shot on Par-5 15th, but quickly regrouped herself to close birdie-birdie for a 68.

It was a perfect start for Tvesa’s preparations for next month’s marquee event, the Hero Women’s Indian Open on the Ladies European Tour at the same course. Last year Tvesa finished Tied-13th alongside Gaurika Bishnoi, who is lying second, but overall is leading the Hero WPGT Order of Merit.

Gaurika started with four steady pars, before she dropped a double bogey on Par-3 fifth and another bogey on sixth. Birdies on ninth and 10th, followed by six pars and another birdie on 17th, meant she ended at 72.

Gurjot Badwal, younger sister of Gursimar Badwal, had three birdies, one on front nine and two on back nine, but dropped three bogeys on back nine.

Diksha Dagar and Vani Kapoor, alongwith last week’s winner Gauri Karhade, were among the big group of five golfers at Tied-fourth with a round of 73 each. The others in the group were Neha Tripathi and Gursimar Badwal.

Neha Tripathi started birdie-birdie and then had a roller-coaster of a round with a total of five birdies against two double bogeys and two bogeys.

Amateur Khushi Hooda, Siddhi Kapoor and the only three-time winner this season Ridhima Dilawari, are Tied-ninth at 76 each.

This is the last event before the Hero Women’s Indian Open scheduled for the first week of October.

Tee times for Round 2, Leg 13 at the DLF Golf and Country Club: