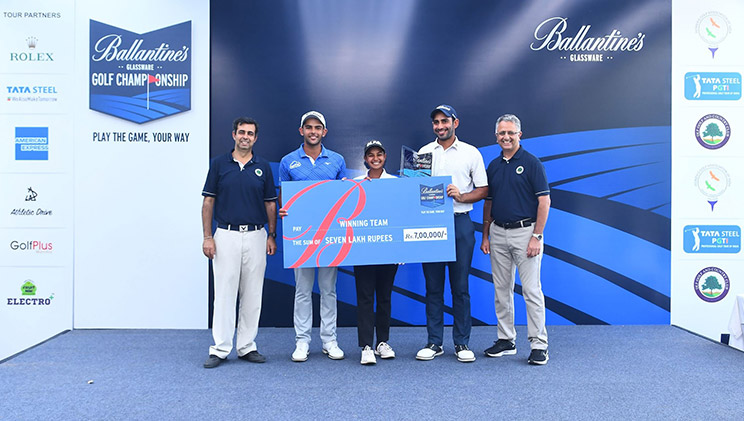 Aadil, Ankur and Hitaashee’s (131-138) team, leaders by two shots after round one, drove home the advantage with a score of six-under 138 in the second and final round to end up with a gross score of 19-under 269 for the week to lift the trophy and take home the winning cheque worth Rs. 7 lakh at the 36-hole tournament, a first-of-its-kind men’s and women’s mixed event played in India.

Hitaashee, playing at her home course, was the best performer for her team for the second day in succession as she followed up her 66 in round one with a 69 in round two.

The team consisting of Yuvraj Singh Sandhu, Sunit Chowrasia and Gaurika Bishnoi (133-138) finished runners-up with a gross score of 17-under 271 after firing a six-under 138 in round two.

It was a Team Strokeplay event with 18 teams participating. The total prize purse was Rs. 30 lakh. All players were to hole out on every hole. The two best scores out of three on each hole (hole by hole) were counted towards the team score.

Hitaashee Bakshi mixed six birdies with a bogey and a double-bogey on the final day. Bakshi, who has won three events on the WGAI since turning professional in December last year, made two early birdies, sinking a 12-footer on the third and tapping-in on the fifth.

Hitaashee then suffered a setback dropping a double-bogey on the sixth where she four-putted. However, Bakshi, currently ranked second on the WGAI Order of Merit, bounced back soon picking up four birdies in exchange for a solitary bogey between the eighth and the 18th.

Hitaashee said, “I produced a solid round today which was a result of our good teamwork. We had some up and down holes today but managed to finish well.

“Aadil, Ankur and I had very good communication among ourselves and anytime we had a problem on the course we discussed it. Even our caddies were helping each other out.

“As Ankur and Aadil were playing a professional event at this course for the first time, I took it upon myself to help them out with the local knowledge and the course conditions as this is my home course.”

It was Aadil Bedi who gave the early breakthroughs to the winning team as he scored a chip-in birdie on the first hole followed by two more birdies on the third and fourth. Aadil, a winner on the PGTI, then conceded five bogeys to end up with a 74 in round two.

Aadil said, “At the start I didn’t know what to expect this week as I had never played a team format before and I was also playing my first pro event at DLF. But I thoroughly enjoyed the experience. After we were five-under through the first five holes today, we focused on keeping the momentum going.”

Ankur Chadha, who posted a score of 69 on day one, signed for a 78 on day two. Besides Hitaashee’s 66, Ankur’s 69 in round one was also crucial to his team’s solid start on Tuesday.

Ankur said, “This was the first time I was playing a competitive event at the new DLF course as I hadn’t seen the back-nine before. So it was nice to shoot a three-under on day one which gave us a good cushion coming into the final day. The key to our success was that the three of us combined really well through both the days.”

The team of Sunit Chowrasia (74), Gaurika Bishnoi (76) and Yuvraj Singh Sandhu (81) held on to their overnight second position on Wednesday. Chowrasia’s eagle on the closing par-5 18th was instrumental in helping his team finish second.

Honey Baisoya, also playing at his home course, shot the day’s best individual score of 68 that played a vital role in his team finishing tied third at 16-under 272. Honey’s team-mates were Mani Ram and Jahanvi Bakshi who is Hitaashee’s elder sister.